Call for papers | Conference program | Directions and accommodations | Contact us 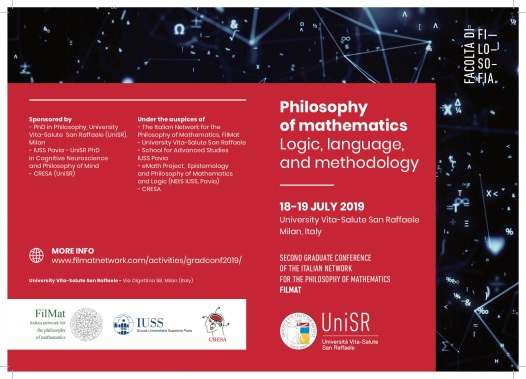 9.15-10.15 Alexandra Kuncova (University of Utrecht)
Ability and Knowledge: On the (In)dispensability of Action Types

Participation is free, but, for organisational reasons, registration by the 10th of July  would be much appreciated. Participation can be confirmed by writing to conference@filmatnetwork.com.

The conference dinner will take place on the 18th of July at 20.00 h at the restaurant La Terrazza of the Best Western Plus Hotel Galles, located in Piazza Lima 2. Unfortunately, the conference organisation will be able to cover the dinner only for the conference speakers and the invited discussants.

Below, a few abstracts from the conference program:

Dummett proposes both harmony and conservative extension as criteria to discern between acceptable and unacceptable rules. The first asks that the elimination rules for a term be justiable from the introduction rules for the same term, while the second asks that the extension of a language with new terms be ineffective to prove new theorems about the old terms. Both these criteria are fully applied by the author to logical rules, but their application to richer fragments of the language like mathematics is only considered in passing. The exact relation between these two criteria is still not clear: there are well known counterexamples to the equivalence between them, but a reformulation of harmony (usually called “stability”) seems to solve almost all these counterexamples. Indeed, truth predicate is actually the only counterexample that
suits this reformulation of harmony.
I will argue that this counterexample rests on some problematic assumptions and propose an old function defined by Peano as another, more suitable, counterexample to the equivalence of these two criteria. I will also argue that this counterexample forces us to reject harmony as a complete criterion for acceptability of rules, while truth predicate does not give ground for preferring conservativeness or harmony. Indeed, while the effect of the truth predicate in PA poses some philosophical problems that are not easily evaluable, the effect of Peano’s function in the same system is obviously unacceptable.

Despite their vexed history, type-theoretic approaches are making a comeback in areas such as semantics, metaphysics, and philosophy of mathematics. In this talk, we explore some of the technical and philosophical questions that arise when we attempt to lift “the veil” of syntactic type distinctions, reinterpreting these distinctions within an untyped framework. In particular, we discuss whether this can be done consistently and, if so, whether it has theoretical benefits. Our focus will be on an extensional interpretation of type theory by means of plural quantification. Towards the end of the talk, we broach some of the difficult issues facing attempts to lift the veil of type distinctions in intensional settings.

Alexandra Kuncova, “Ability and Knowledge: On the (In)dispensability of Action Types”

In my talk, I explore the analysis of ability and knowledge. Imagine that I place all the cards from a deck face down on a table and ask you to turn over the Queen of Hearts. Are you able to do that? In a certain sense, yes — I refer to this as causal ability. There
are 52 actions of turning over one of the cards available to you and one of them guarantees that you turn over the Queen of Hearts. However, in the epistemic sense, you are not able to turn over the Queen of Hearts, because you do not know which of those 52 actions actually guarantees the result.
In my presentation I elaborate on epistemic ability and two ways of modelling it in stit theory. The standard analysis relies on action types — as opposed to action tokens — and states that an agent has the epistemic ability to do something if and only if there is an action type available to her that she knows guarantees it. I will show, however, that these action types are dispensable: I will present a formalism without action types that can simulate the standard analyses of epistemic ability that rely on action types. This formalism is a standard epistemic extension of stit theory, and epistemic ability is characterised by a combination of impersonal possibility, knowledge and agency.
In light of this dispensability of action types in an epistemic setting I will finish by reflecting on whether action types might be useful for other senses of agency and ability.
(This is based on joint work with Jan Broersen, Hein Duijf, and Aldo Ramirez Abarca.)

Vincent Peluce, “The Perception of Time in Intuitionistic Arithmetic”

In L.E.J. Brouwer’s first act of intuitionism, the subject’s  perception of time is put forth as the foundation on which arithmetic will be built. According to Brouwer, proper intuitionistic arithmetic, as with the rest of intuitionistic mathematics, is not tied to any particular formal system. When we try to axiomatically approximate an intuitionistic arithmetical system, we are faced with the problem of incorporating the subject and their perception into the axiom system itself. We discuss some unsatisfactory responses to this problem and then offer a solution.

In recent work, Button and Walsh introduce a position they call mathematical internal realism, which, they suggest, explains how we can acquire precise and determinate mathematical concepts without performing semantic ascent (i.e. without talking about models) but rather appealing to internal categoricity results (i.e. deductive proofs within second-order logic to the effect that any structures satisfying the axioms of arithmetic/set theory are isomorphic). In this talk, we critically examine the merits of mathematical internal realism. We contend that an analogue of the challenge of acquiring mathematical concepts re-emerges without semantic ascent, in terms of the notion of determinacy, and argue that this challenge severely threatens internalism.

The notion of dependence figures prominently in the discussion of mathematical structuralism (cp. Linnebo 2007; Wigglessworth 2018), while not much attention has been paid so far to abstractionism in the philosophy of mathematics (for intro, cp. Cook 2007l Ebert & Rossberg 2016). Here I distinguish between two notions of dependence, metaphysical vis-à-vis conceptual, that are operative in the abstractionist program. I then compare two ways of formulating Hume’s Principle as a claim of grounding.
I argue that the choice between those two formulations should be determined by rhe relative order of priority between metaphysical and conceptual grounding. I finally compare abstractionism and structuralism.

All images used in these webpages are for merely

ornamental purposes and for what we believe

to be their evocative power also with respect

to the Network’s themes. Copyrights are of

their lawful owners, images are used in

connection with wholly non-profit activities (as

non-profit is the Network managing these

pages), and they are not part of the official

posters of the Network’s conferences and

events. Images can be removed at any time

upon request of the copyrights owners, by